I’m afraid that with four (yes, FOUR) cats Tom and I probably fall into the “crazy cat person” category. I think when you hear each of our cat’s stories you’ll understand why we just had to take each one!

They’re our girls. Our babies. Our little bears. Here is a rare photo of all four cats. Food is the only thing that will bring them together. 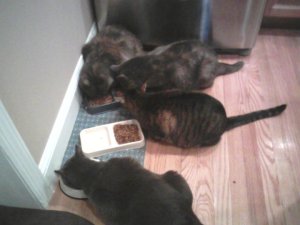 Mima is our first kitty. When Tom and I first started dating, before we were engaged, one of his childhood pets – Quincy – passed away. Quince was a striped tiger much like the Mima girl. I had decided that I wanted to get Tom a kitten, and when I went to the pound I found only one kitten who sort of resembled his old cat. She was a sickly little thing who just sat listlessly in the back of her cage. While all of the other cats were screaming at me, she just laid there and coughed. Can you tell I’m a sucker? I took her out of her cage (against the rules, I then found out) and I knew I had to have her. The poor little thing. They told me that they thought she had a hairball – I’d had only dogs for most of my life, so I didn’t know any better. I paid my $30 and took her home. As soon as I took her out of the box (in the parking lot of the pound, mind you) Mima was all over me. She just loved me. In retrospect, I was probably the first person to show her any affection. But ugh, that cough. I took her to my vet and he thought she had a case of the croup, and put her on an antibiotic, but the cough only got worse. About two weeks later she had a near fatal asthmatic crisis and had to be intubated and kept over night. They doubted she’d make it, but she made it through the first night. I took her home the next day with an inhaler (yeah, a cat inhaler. Can you imagine what my arms looked like when I tried to administer it to her?) and for the next week I took this cat with me everywhere. Yes, I brought this little sickly thing with me to work and she just slept on my desk right next to me. I was so scared to leave her alone, lest that awful cough come back. It was my first semester teaching English at SCCC and I even brought her with me to class! Little by little, she improved. And after another two weeks, and about $4000, she was out of the woods. As a result of my care and love, I think, Mima has been, for the last seven years, attached to my hip. Most people think I’m insane for spending that kind of money on a cat that I’d only had for a few weeks at the time, but I think that when you adopt a pet you make a lifelong commitment to care for them!

I mentioned that I had originally adopted Mima for Tom. It didn’t really workout, though. She loved me so much, and she, well… she tolerated him. When I heard that a woman at work had a cat that had a litter of kittens, I thought it was a good opportunity to get another kitty that might love Tom the way Mima loved me. And so we come to the story of Lily and Claudette. Our twins.

As I said, a girl at work had a litter of 5 kittens, and we went and Tom picked one out – he specifically asked for the “neediest” cat in the litter, and that would definitely be our Lily girl, the short-haired kitty in the photos below. She cried non-stop as a kitten, and she still never shuts up. In fact, last night she woke me up at 3am just to yell at me a little bit. She was only three weeks old at the time, and hadn’t been weaned yet, so I actually had to feed her with a little doll bottle. She fit in the palm of my hand!

As the week went on, all of the other kittens were adopted, but by Friday no one had committed to the little long-haired girl. To be honest, her personality wasn’t that pleasant as a kitten! As you may imagine, I am a sucker, and on Friday I took Claudette home too. I’m so glad that I did, because Claudette has turned out to be not only a beautiful long-haired cat, but she has the sweetest personality.

And for 3 or 4 years we lived happily with our three cats. One night, Tom had gone to a friend’s house to play poker. On his way out to his car, he brought out the garbage to throw it in the dumpster… and out of the dumpster jumped a scrawny little cat. The poor thing was malnourished but incredibly loving. So, he brought her home. When she came into the house I could see that although she was a stick she had six HUGE boobs. I thought, oh crap, she’s pregnant! A trip to the vet revealed that she had actually probably already birthed her litter of kittens a few weeks prior and had already weaned them. After she was given a clean bill of health, and after we had her spayed, we decided to make Suki a part of the family. It was rough going at first. The other cats HATED her, and the feeling was mutual. She was very aggressive and the three pampered little queens did not know what to make of her. But, gradually, the hissing and the slapping has slowed to a minimum. We do have a daily scuffle, but for the most part they get by as roommates who can’t stand each other, but tolerate being in the same space. Upon moving into a home, Suki became obsessed with food and toys. She is now fat and she LOVES to play. She’s our little ravioli.

And, so you see WHY we’ve accumulated so many cats. They needed our help and our love. What else we were supposed to do? 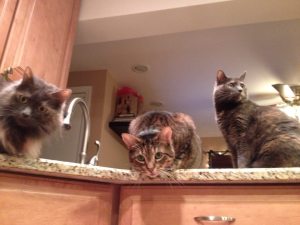 Here’s a video introduction to our ladies!